Deer typically aren’t affected much by individual weather events, no matter what their name or air temperature. What matters most with deer is a winter’s cumulative misery from December through April.

Wildlife biologists, therefore, give the 2018-19 winter a “moderate” overall rating with small regional smatterings of “severe.” The Department of Natural Resources determines those ratings based on its “winter severity index,” which has scored every Wisconsin winter since 1959.

The WSI ratings help biologists estimate winter’s impact on deer herds across the state’s northern two-thirds. WSI monitoring begins Dec. 1 and ends April 30. On each of those 151 days, DNR staff at 33 Northwoods sites and 22 farmland sites record the snow depth and lowest air temperature. They assign 1 point for each day temperatures are zero or colder, and 1 point for each day snow depths measure at least 18 inches.

Dan Storm, the DNR’s deer and elk ecologist, expected few areas to reach the “very severe” category by April 30. That’s because only three of the DNR’s 55 monitoring stations – Brule, Gile and Eagle River – had accumulated at least 90 points by March 31.

Further, only nine other sites reached the “severe” category of 80 points by March 31: Crandon, Escanaba Lake, Mercer, Merrill, Prentice, Rhinelander, Summit Lake, Trout Lake and Woodruff. Storm said the snowstorm that hit Wisconsin on April 11-12 wouldn’t add much to the cumulative total, given the rapid melting that followed.

In effect, this past winter lasted only February through March. All 12 monitoring sites that entered April in the “severe” or “very severe” categories racked up totals 30 or higher both months.

Deer had it easy statewide in December and through most of January. Of the DNR’s 55 monitoring stations, Mercer recorded December’s worst score with a mere 3 points. By the end of January, most stations had crept into the low to mid-teens, but only five had 20 to 22 points: Barnes, Brule, Gile, Gordon and Pence.

Deer suffered most around Brule, and also across parts of Iron, Vilas, Forest and Oneida counties. They also likely suffered in other areas where their numbers had been too high for too long, causing overbrowsing in forests and woodlands.

“It’s speculation, but we probably lost a few deer nearly everywhere, even in some farmlands,” Storm said. “Deer can overbrowse woodlots once fields get picked and snows cover up what little grain remains. Wherever food is scarce in winter, deer struggle, especially the young ones.”

Overall, though, the 2018-19 winter will soon blur into history with the many other mild to moderate winters of the past 20-plus years. Since the winter of 1996-97, Wisconsin’s overall WSI was severe once, 2000-01; and very severe once, 2013-14. That record-shattering winter five years ago was a nightmare for Northwoods deer.

For perspective, let’s assume the Brule, Gile and Eagle River monitoring stations surpass 100 on the WSI when the DNR runs its final totals next week. That would mean three of the DNR’s 33 Northern sites (9%) reached the “very severe” category. In contrast, 33 of the DNR’s 34 Northern monitoring sites in 2013-14 exceeded 100, or 97%. But that bad news didn’t end there. Fifteen of those 33 sites (45.5%) suffered WSI ratings above 150.

OK. Enough about deer. The Northwoods’ other popular game, ruffed grouse, likely fared well this winter, according to Mark Witecha, the DNR’s upland bird ecologist. Witecha said the polar vortex dumped enough snow out in front of its path to give grouse good “snow roosting” cover before subzero temps arrived.

Snow roosts, of course, are simply snow caves. Ruffed grouse torpedo into snow-cover at least 8 to 10 inches deep to insulate themselves against subzero temperatures. Their caves also hide them from avian and four-legged predators.

Early April’s big snowstorm also arrived early enough, and melted fast enough, to not hamper grouse nesting. The DNR’s spring drumming surveys were just getting underway after Easter, so it’s too soon to know how grouse numbers are faring.

Witecha also said the DNR won’t know until July or August how many of the 238 grouse submitted by hunters last fall carried West Nile virus. The DNR announced in mid-January that three of 16 hunter-submitted grouse from Ashland and Douglas counties had the virus.

Wisconsin, Michigan and Minnesota are taking part in a three-year study to assess West Nile’s prevalence in the Great Lakes region. The samples are being tested in Georgia.

The DNR launched the effort last fall amid speculation that West Nile virus was reducing grouse numbers. Witecha expects to complete the management plan by January. 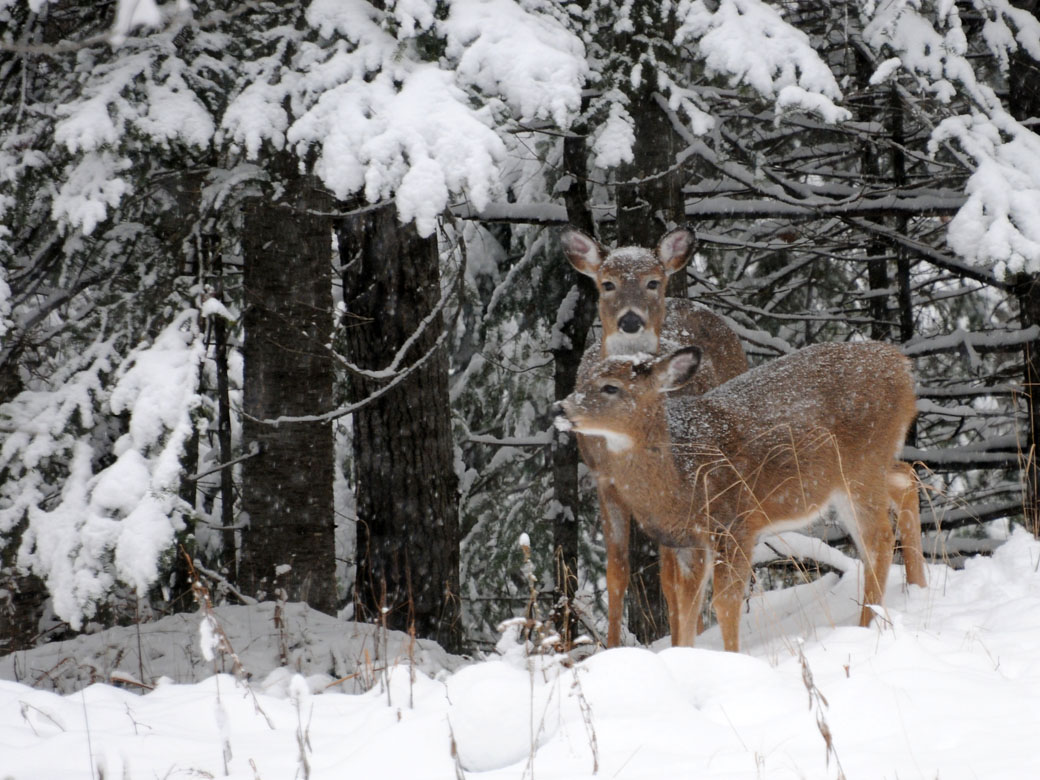 As winters go, Wisconsin’s deer herds didn’t have things too hard the past five months from its central farmlands to northern forests. (Patrick Durkin photo)

Late-Morning Patience Pays off with an Elk